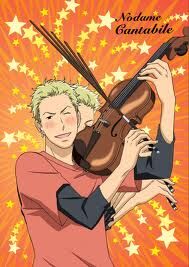 He has a yellow green hair and black eyes. He has a fair skin tone and usually wears casual clothes of sort.

He is something of a primadonna whose violin technique is seen by himself to be deeply personal but by others to be simply sloppy. He sees Chiaki as a rival for attention and tries hard to compete with his "Princely" image of him. He likes Nodame for her free-spirited ways. He is the concertmaster of the S Orchestra conducted by Chiaki, and a violinist in the R☆S Orchestra. He is also the one who thought that performing like

Jimi Hendrix , and adding a touch of 'rock' would give quality despite that it looks dumb in an original orchestra (as stated by Chiaki). He has been dating Kiyora Miki.

Community content is available under CC-BY-SA unless otherwise noted.
Advertisement